Shortly after the first DAPL route was proposed, and before Energy Transfer Partners (ETP) had even applied for permits from the Army Corps of Engineers (“Corps”), the Standing Rock Sioux Tribe (SRST) were voicing their objections and conveying their concerns directly to both parties. Over the course of the permitting process, SRST attempted to reach out and communicate their stance on numerous occasions, both in meetings and in letters. Despite these consistent objections, ETP went right ahead with their proposal, resulting in the release of a draft environmental assessment (EA) in December 2015. According to the SRST, the draft EA was deeply flawed, for it contained no mention of the potential impacts on subsistence hunting, fishing, and gathering in the Lake Oahe area, nor did it provide an assessment of the risk of oil spills. In fact, the EA failed to mention the existence of the SRST at all, and did not include the reservation on maps of the site, even though
Post a Comment
Read more

Blog #2: View of the Federal Government 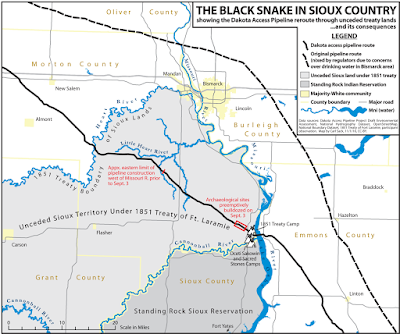 The involvement of the Federal Government in this case stems from the proposed location of the Dakota Access Pipeline (DAPL), which crosses federally owned land under management of the Army Corps of Engineers (“Corps”). When the Corps received applications from ETP asking for the right to construct the pipeline on federal property, several sets of federal procedures were initiated at once. First of all, the Corps began gathering evidence and preparing a draft environmental assessment (EA). Environmental assessments are governmental reports prepared by the Corps which essentially evaluate the consequences (positive or negative) that a proposed project could reasonably be expected to have on its surroundings. This judgement is then in used to determine if the project would satisfy federal requirements under the National Environmental Policy Act (NEPA). NEPA is a federal law that was enacted in 1970 with the aim of promoting the enhancement of environmental conditi
Post a Comment
Read more 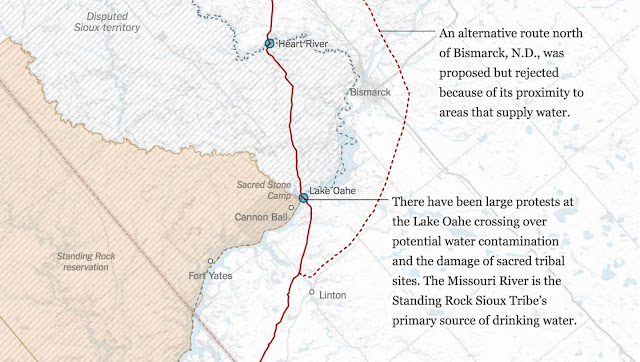 Source: http://www.storybench.org/contextualizing-dakota-access-pipeline-roundup-visualizations/ The Dakota Access Pipeline (DAPL) is an approximately 1,100 mile long crude oil pipeline which runs from North Dakota to Illinois. The project was originally proposed by Energy Transfer Partners (ETP) in May 2014, and featured a route which took the pipeline underneath the Missouri River at a location several miles upstream of the small North Dakota town of Bismarck. This plan was quickly revised however, due in part to a significant public outcry by residents of the town. The alternative route, which was proposed a couple of months later, took the path of the pipeline through lands granted to the Standing Rock Sioux Tribe (SRST) under the Treaty of Fort Laramie in 1851, and placed the location of the river-crossing at Lake Oahe, just half a mile upstream from the Standing Rock Sioux Reservation. This decision led many critics of the pipeline to call the proposal an
Post a Comment
Read more